Impressions of a new journey in eastern Canada : Jean-Pierre M

The goal of our fifth trip to Eastern Canada was to explore the only area that we didn’t already know: Prince Edward Island. Paulette had the idea during our previous trip to Nova Scotia and Newfoundland in 2011. 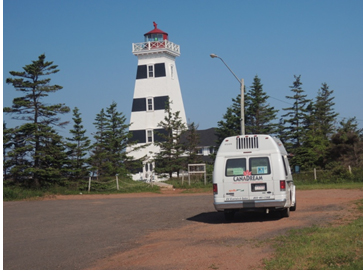 As with our previous trips to this region we booked our motorhome through CampingCar-Online in Paris and collected it in Montreal.

Prince Edward Island is very small and therefore could not be the only destination of our four week trip.

Therefore I organised a route that would allow us to explore areas that we had missed during our previous trips to Quebec. From Montreal we pass Trois-Rivières and then head north to Shawinigan. We spend two days in Parc de la Mauricie. Following road 155, which is quite rugged and wild passing through Canadian forest (the only town we saw was La Tuque), we reach Lac St Jean. Here we notice a contrast. The areas around the shore of the lake are very populated, urban and rich, whereas the surrounding areas are big livestock farms. Then a shift in direction as we return to the south by road 175 and cross other more mountainous landscapes, Jacques Cartier Park and back to the St Lawrence River in Quebec. Even though we have travelled this area many times before, we still manage to explore some new routes.

From Quebec we head north following the shore of the river with an overnight stop at the port of Ile aux Coudres. The next day we cross the river by ferry at the mouth of Saguenay and continue our journey east with poor weather. After Tadoussac the landscape becomes wilder with a more rugged coastline. We are happy to take this road again even though we have travelled it several times before. Before boarding at Godbout to cross by ferry and reach Gaspésie, we spend a night in a beautiful camp, Bergeronnes, facing a very rough sea that makes us a little worried about our ferry crossing the next day! But our fears prove to be in vain!

On the other side in Matane the climate and temperature are suddenly much warmer, as if the river creates a north-south barrier!

We discover again the Gaspé coast with all its colourful villages with very specific names (L'Anse au Renard, Cap-Chat, Rivière à Rebours…….... ), which we had already explored 10 years ago. We see little change and the region retains its very touristy orientation. It is host to the Quebec vacationers and the coast is not too urbanized. We take a small detour into the interior of the peninsula to Albert Park which is still quiet at this time of year. It is a landscape of little mountains with the tops still covered in snow. Further east at the tip of the Gaspé we spend a day in Forillon Park as its setting is very impressive with both mountains and the ocean. Here we will have the chance to meet some bears during the walk to the cape. Of course we stop at one of the big tourist points of this region, Cape Gaspé and its famous Percé Rock. 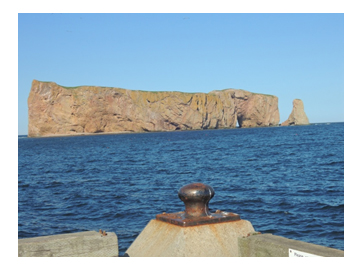 The southern coast of Gaspésie is less sought after by tourists except to the west at Chaleurs Bay, which deserves its name as it was indeed sunny and warm. Welcoming tourists was well organised in small towns such as Caspédiac or Carleton-sur-Mer. We stop for the night in a village parking which gave us the opportunity to be invited to a ‘Bingo’ party which seems to be particularly popular in this country!

We continue our trip and enter New Brunswick by Campbelton. Again this is a rediscovery of the coast we already travelled in 2006. Generally it is an easy drive although the landscape is still varied and the people very engaging. New Brunswick is the only officially bilingual province in Canada and the Anglophones share the territory with a strong standing Acadian population perpetuating the French influence, which is reflected in the names of many of the villages: Grande-Anse, Belledune, Val- Commeau...... Specific symbols mark the landscape: the blue-white-red (marked with a yellow star) can be seen on telephone poles, public benches and also on the lighthouses like in Caraquet which hosts the biggest Acadian festival. Bouctouche perpetuates the memory of "La Sagouine" and "Pelagie la Charrette" – the memory of Antonine Maillet is always present.

The large Kouchibouguac Nature Park gives an idea of how life must have been for the first people who lived here and the settlers that followed. It is also a wildlife reserve where you can see rare breeds such as the piping plover and other iconic animals such as bears, deer and porcupine. 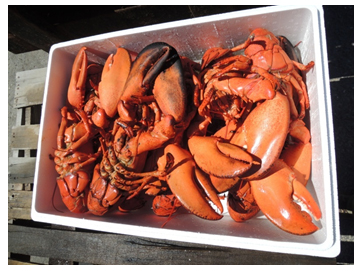 Lobster fishing is a big economic activity on this side of the coast. The ‘capital’ of this industry, Tracadie to Shediac, symbolises this activity with a statue of a huge bronze lobster a few meters high and weighing several tons! Small boats manned with one or two men go out daily not far from the coast to fish for lobsters. They return with their catch which is sold at the port or sent off in a refrigerated truck. Of course we take advantage of the fresh catch arriving directly off the boat!

We continue towards our goal and reach the south coast. We cross Confederation Bridge, which has allowed easy passage to Prince Edward Island since 1997 and has disrupted the life of the island. 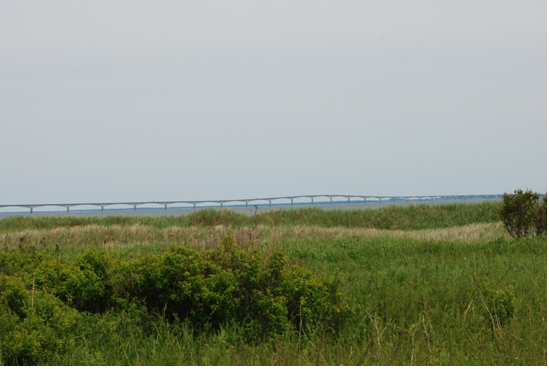 At 13 km in length, this bridge is the world's longest sea bridge. It owes its name to the fact that in 1864 the representatives of new states in this region of North America gathered on this island to formalize the creation of the young Canadian Condominium. 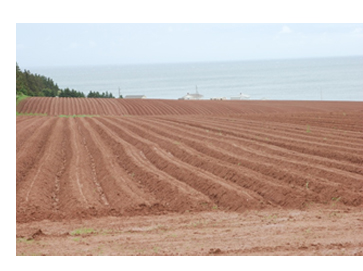 Prince Edward Island is 224 km long with a width varying from 60 km to 4! Its altitude is low (145 m) and the terrain is moderately hilly with forests, grasslands and crops marking the landscape. The coast is lined with red rocky cliffs with deep indentations housing small ports and long beaches with red sand. Part of the east coast is lined with a string of coastal dunes that are classified as a Nature Park. The soil is fertile and the main industry is potato farming, which mainly occurs along the coastline. Lobster fishing and tourism also play an important role in the economy of this small territory. Many old wooden lighthouses, often white and red, mark the extreme points of the island. Many of them are still active despite their dilapidated appearance and are now operated automatically. The small, charming villages bordering the east coast promote the area. A visit to ‘Green Gable’ should not be missed! It is the local setting of the romantic story of ‘Anne’, the young heroine in a long series of novels by Lucy Maud Montgomery which has been translated into 47 languages! 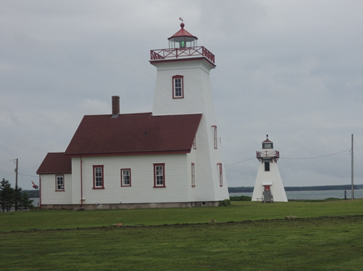 Curiously, although this state is English, major tourist and traffic information is also given in French. On the west coast of the island a strong Acadian population remains that upholds the culture and old traditions. The original Micmac Indian population has almost disappeared. 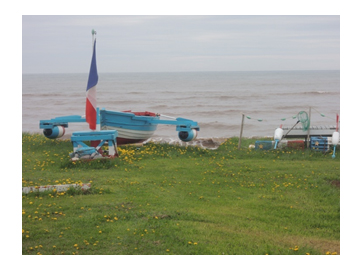 We went around the island in a week which was more than enough time and we followed itineraries suggested in travel guides. Life on the island is peaceful with a friendly welcome and a rural, calm atmosphere. The population is not more than 140 000. Most people live in the capital, Charlottetown. 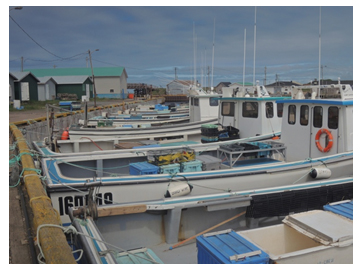 The island’s ports seem much larger than those in New Brunswick: an impressive row of boats lining the docks waiting for the morning departure. Some leave for net fishing (what fish?), but most fish lobster. This intense fishing makes ??me question its sustainability…... after all the cod in this region has now totally disappeared...... Still, we enjoy the proceeds of the morning’s catch!

We return to the continent by the Confederation Bridge. The rest of our trip will involve crossing New Brunswick by taking the road to the valley of St Johns River and making a few detours and stops especially in the Mont Carleton Park, a large remote reserve. Here we take a real step back in time, a total immersion into a perfectly protected wilderness.
Just to note: while traveling in the interior of this country we have always conversed in French. Our language remains well established in English-speaking countries. 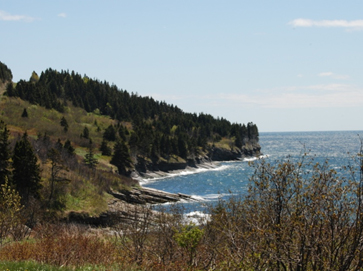 We then rejoin the Gaspé coast and join the south shore of St Lawrence with a stop in the beautiful Bic Park which is rich in local flora and fauna. We complete the trip by continuing along the St Lawrence to Montreal where we return our camping car on June 24, Quebec’s National Holiday.

Over 28 days we traveled 6500 km in this region of Canada, discovered Prince Edward Island and revisited some of Quebec and New Brunswick. As usual we often camped outside of camping sites, one night in front of a lighthouse and often in the parking lot of a port, without any problems from residents or authorities. Very often, almost every night, we were visited by neighbors or a fisherman who came to inquire about our trip in their country. These were always enriching exchanges.

A pleasant, restful journey with only one downside: the sun was not always with us, but who cares!

Another regret is that this trip was probably our last in this welcoming Francophone region of Canada….....

Plan your trip to Canada by Profile

Have a question for us?